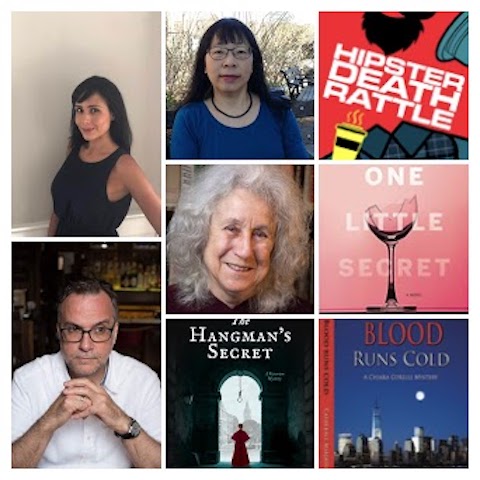 Join us for a panel discussion featuring Cate Holahan, Richie Narvaez, Laura Joh Rowland, and Catherine Maiorisi. We’ll be discussing questions related to diversity and writing outside of the box of traditional crime fiction. This promises to be a thought-provoking panel with extraordinary writers.

Cate Holahan is the USA Today Bestselling author of The Widower’s Wife, as well as the acclaimed psychological suspense novels Lies She Told and One Little Secret. Before turning to fiction, she was an award-winning journalist. She lives in NJ with her two young daughters, husband, and food-obsessed dog.

Catherine Maiorisi is the author of the NYPD Detective Chiara Corelli mystery series featuring Corelli and her reluctant partner, Detective P.J. Parker, two tough women who fight each other and the blue wall, while solving high profile murders. The first in the series, A Matter of Blood, was a 2019 Lambda Literary Award Finalist. The second is The Blood Runs Cold and the third, A Message in Blood will be released in early 2020. Catherine has also published two romances, Matters of the Heart and No One But You. Her third romance, Ready for Love, will be published in the fall of 2019. Her three mysteries can be found in the Murder New York Anthologies. She also has published four romance short stories.

Richie Narvaez is the award-winning author of Roachkiller and Other Stories. His work has appeared in Long Island Noir, Plots with Guns, Thrilling Detective, and Tiny Crimes: Very Short Tales of Mystery and Murder, among others. His debut novel, Hipster Death Rattle, was published in March 2019.

Laura Joh Rowland is the author of The Hangman’s Secret, the third book in her mystery series set in Victorian England, starring photographer Sarah Bain. Her other series features 17th-century Japanese samurai detective Sano Ichiro. It has been optioned by Universal Studios. Her work has been published in 21 countries, won RT Magazine’s Reader’s Choice Award, and made The Wall Street Journal‘s list of the five best historical mystery novels. Laura lives in Queens.